“Rush, in recognition of all that you have done for our nation, the millions of people a day that you speak to and that you inspire, and all of the incredible work you have done for charity, I am proud to announce tonight that you will be receiving our country’s highest civilian honor, the Presidential Medal of Freedom.”

“Rush, in recognition of all that you have done for our nation, the millions of people a day that you speak to and that you inspire, and all of the incredible work you have done for charity, I am proud to announce tonight that you will be receiving our country’s highest civilian honor, the Presidential Medal of Freedom.”

Rush Hudson Limbaugh III, Radio’s Greatest of All Time and America’s Anchorman, revolutionized the media industry with his unprecedented on-air political analysis and sharp satirical humor. After years working as a Top 40 disc jockey and a stint with the Kansas City Royals, he launched The Rush Limbaugh Show out of Sacramento in 1988. His influence spread rapidly as word of his unique take on current events reached the nation. He was featured on news programs and late night talk shows, began the Rush to Excellence Tour, and started his own television show. Radio syndication grew from 56 to an unheard-of 600 stations, with over 30 million weekly listeners.

In recognition of his national influence, Rush was inducted into the Hall of Famous Missourians, the Radio Hall of Fame, the National Association of Broadcasters Hall of Fame and received five Marconi Radio Awards. He was also widely esteemed as an adult and children’s author, including seven #1 New York Times bestselling books and as a recipient of the Children’s Choice Author of the Year Award. In 2020, Rush was presented with the highest civilian honor, the Presidential Medal of Freedom, by President Donald J. Trump. Rush Limbaugh leaves a lasting legacy of excellence, determination and patriotism. Where It All Began

Rush Hudson Limbaugh III was born in 1951 in Cape Girardeau, Missouri into a family of lawyers, politicians, entertainers, and military service members. He received his first radio, a Remco Caravelle for his eighth birthday, and brought joy to his mother Millie and brother David with early at-home “broadcasts.” At twelve, he started his first job shining shoes at a local barber shop, before landing a gig at sixteen as an on-air broadcaster at a local radio station.

Despite warnings from his WWII veteran father, who worried about his career choice, Rush felt the call and left “The Cape” for the big city of Pittsburgh. There he took on the deejay stage name “Bachelor Jeff Christie.” Always rebellious, Rush was fired for incidents like going off-script or playing Rolling Stones songs too many times. He moved from station to station in this period and showed some of the sharp humor and political musings that would later make him a household name. In the mid-1980s, he took his father’s advice and tried out marketing at the Kansas City Royals, where he met his lifelong friend, Hall of Famer George Brett. He gained business insight during this time, but felt the call again to return to radio. In 1988, he was scouted to replace Morton Downey, Jr. in Sacramento, California. There, in partnership with Ed McLaughlin, Rush created The Rush Limbaugh Show. 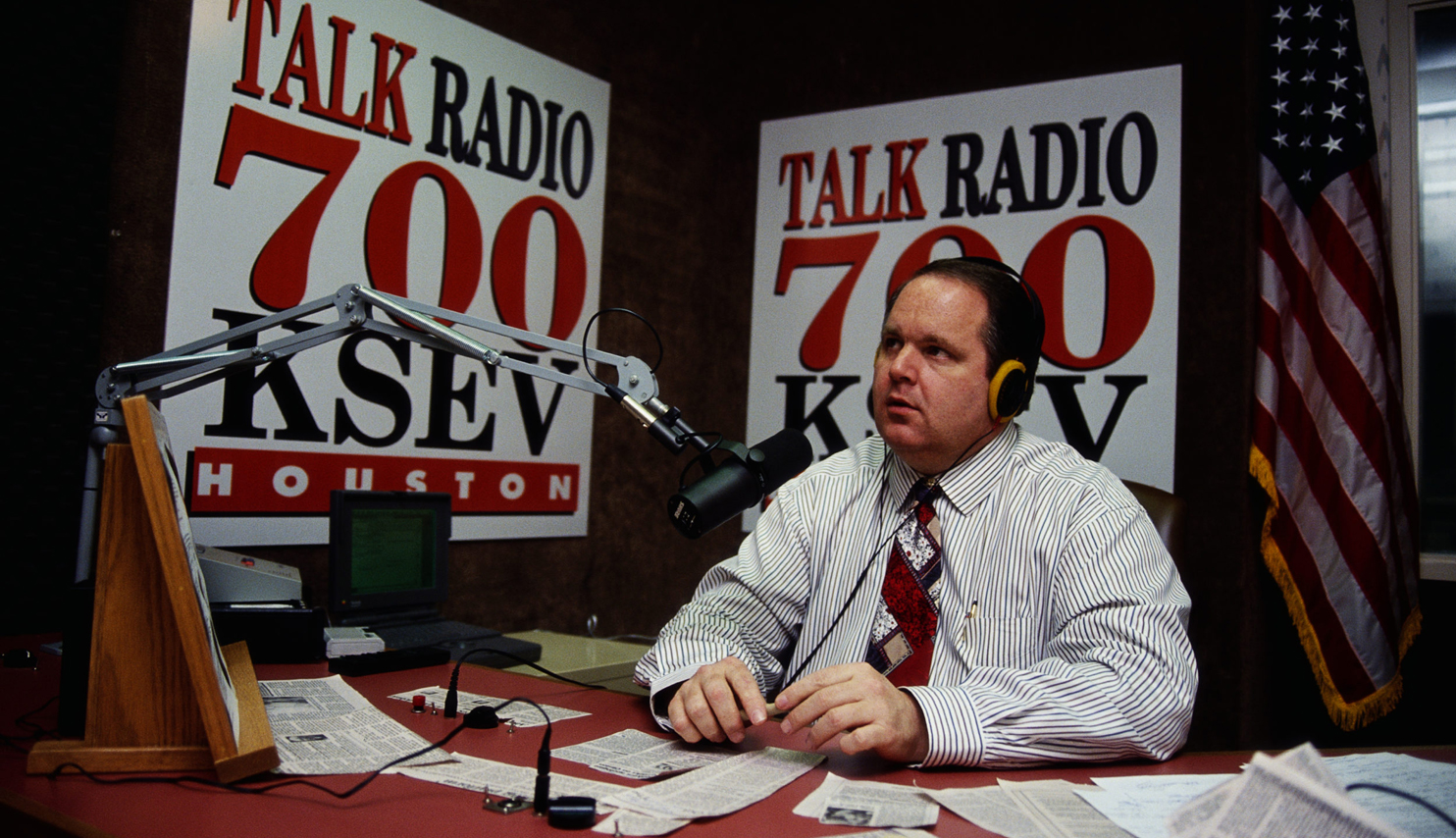 Rush became an almost overnight sensation with the national media clamoring to feature him on their day and late night shows, in magazines and newspapers, and on sitcoms, including 60 Minutes, 20/20 with Barbara Walters, and The Late Show with David Letterman. During the 1980s and early 1990s, while living in New York City, he launched a successful television series and traveled the country speaking to Americans on the Rush to Excellence Tour. His conservative political commentary books became record-breaking #1 New York Times bestsellers.

Rush’s humor, wit, satire, and political precision appealed to Americans who shared his belief in the exceptional nature of America’s founding principles. A reserved man by nature, he had a talent for self-effacing bravado. Rush captivated listeners with his combination of serious discussion on political, cultural and social issues with satirical and biting humor, which parodied previously “untouchable” personalities and topics. He never wavered in his care for his audience as individuals and loved each as a member of his extended family. True to his Midwest roots, he treated callers with great respect and never let personal matters diminish the work he “was born to do.”

The Rush Limbaugh Show remained the #1 Radio Talk Show in America for over 32 years, with over 30 million weekly listeners. Recognition of his success led to his induction into the Radio Hall of Fame, Hall of Famous Missourians, National Broadcasters Hall of Fame and to his receiving five Marconi awards.

“Rush is the number one voice for conservatism in the country.”

“Rush is the number one voice for conservatism in the country.” After many years of friendship, Rush married “the love of his life” Kathryn Adams at an unforgettable ceremony in Palm Beach. After exchanging vows in front of close family and friends, the couple was deeply honored to be serenaded by the legend himself, Sir Elton John. From the moment Rush and Kathryn met they balanced each other perfectly and were always laser-focused on goals such as helping others, supporting our military and first responders, and starting new business ventures. Among many special accomplishments, they wrote a series of #1 New York Times bestselling American history books geared towards the younger generation – the wildly popular Adventures of Rush Revere Series. They loved working late into the night together surrounded by a bouncy pack of old English sheepdogs named after prestigious historical figures and very territorial Abyssinian cats. In his leisure time, Rush thoroughly enjoyed rounds of golf with his friends throughout the United States or traveling to Hawaii and Cape Girardeau with Kathryn to visit family. 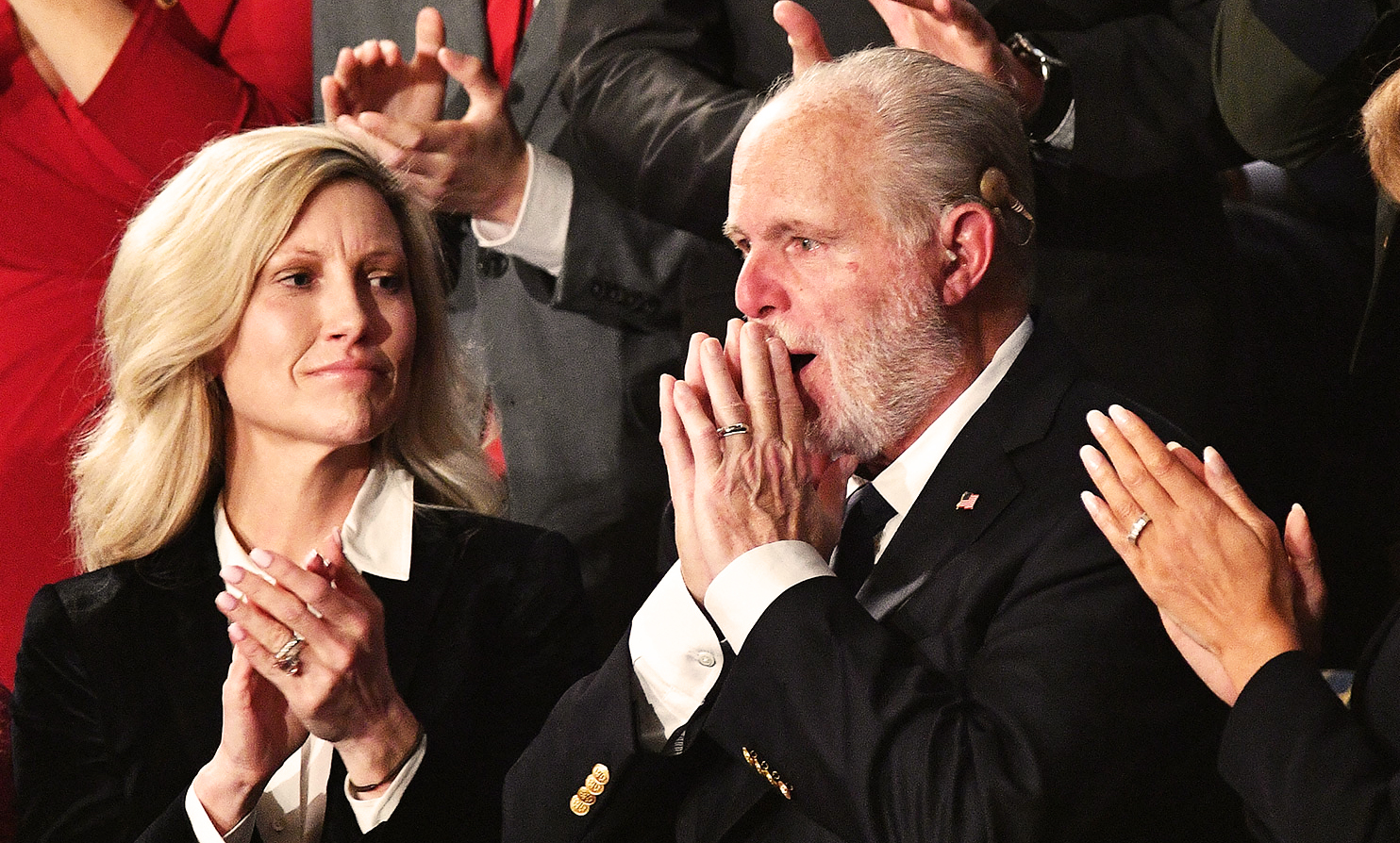 While hugely successful on the radio and in business, Rush never lost sight of those who helped him along the way. He was always extraordinarily generous both personally and through charities such as the Lymphoma & Leukemia Society, the Marine Corps-Law Enforcement Foundation, and the Stephen Siller Tunnel to Towers Foundation. He found true joy in sharing his passion with others and helping them pursue their own American dreams. Over the years, Rush and Kathryn have donated millions of dollars to thousands of individuals and charities. In 2019, the Rush and Kathryn Adams Limbaugh Family Foundation was established in order to support the values that make America exceptional. The Foundation provides direct support to the U.S. military, first responders, law enforcement and their families. It also provides youth scholarships, small business grants, assistance to those experiencing a health crisis, and funding for cancer research.

President Donald J. Trump awarded Rush America’s highest civilian honor, the Presidential Medal of Freedom, at the 2020 State of the Union Address. Despite having recently been diagnosed with a terminal illness and in a great deal of physical pain, Rush and his wife Kathryn flew to Washington D.C. to sit next to the First Lady in the United States Capitol Building at the President’s invitation. Surprised and deeply touched by the award, Rush later said it was the most incredible honor of his life. His family, friends, and the nation will remember Rush the public man – Radio’s Greatest of All Time – the brave patriot who “learned to be hated” and stood up boldly for American values. He will also be remembered as a humble, private courageous man who overcame the suffering of professional rejection, disability, addiction, and terminal illness to provide kindness and respect to every person he met. He will be terribly missed, but courageous Americans will continue his mission to teach everyone to love the values of our incredible country, the “greatest nation the world has ever seen.”

“As they said of Julius Caesar, veni vidi vici – Rush came, he saw, he conquered.”

“As they said of Julius Caesar, veni vidi vici – Rush came, he saw, he conquered.”